My research focuses on the biology of genomic conflicts and what they can tell us about the evolution of conflict and cooperation more generally.

I develop population genetic theory and perform comparative analyses to ask how and why such conflicts occur and how they fit into models of social evolution. I also work on the foundations of the so-called gene’s-eye view of evolution, also known as selfish gene theory. I am currently writing the first book-length treatment of its history and development for Oxford University Press (scheduled for publication in 2021). 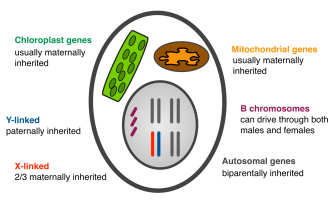 With Andy Clark and Manisha Munasinghe (Cornell), I have used population genetic theory to show how the fate of compensatory nuclear modifier loci that alleviate the effect in males depend on whether they are located on autosomes or sex chromosomes. Our analytical framework also allowed us to discover a novel kind of sexual conflict: Father’s Curse. A major focus of current work is to determine how likely we should be to detect it nature. We are also using experimental crosses in Drosophila to test the extent of mitochondrial-Y chromosome epistatsis.

In the past, I have also investigated how signatures of mito-nuclear conflicts can be detected in sequence variation, and in the distribution of cyto-nuclear genes.

What can selfish genetic elements tell us about the evolution of conflict and cooperation?

I study what genomic conflicts have in common with other examples of conflict, whether spread of cancer cells, conflicts between worker ants over reproduction, or between the microbiome and its host organism. Together with Kevin Foster (University of Oxford) I develop mathematical models connecting selfish genetic elements to general models of social evolution.  With Nick Davis (LSHTM), we recently published a first manuscript describing how enforcement, mechanisms that suppress selfish behaviour, is an underappreciated, and often critical, ingredient for cooperation at all levels of life – from genomes, eukaryotic cells and multicellular organisms to societies and mutualisms between species.

The foundations of the gene’s-eye view of evolution

Why are transposable elements so common, and the genomes so large, in some species but not in others?

Transposable elements are selfish genetic elements that can self replicate and insert into new locations in the genome.  My PhD work with Stephen Wright (University of Toronto) centered on how changes in modes of inheritance, such as the evolution selfing, sex, and increases in ploidy, affect the evolutionary dynamics of transposons. I am also interested in how transposons contribute to variation in genome size, particularly in plants. I have studied these questions in a variety of plant systems, including Arabidopsis, Capsella, and Oenothera.